”On the Azores there are probably more cows than people”

The Azores are nine volcano islands forming an autonomous region of Portugal. The islands are divided into three groups; 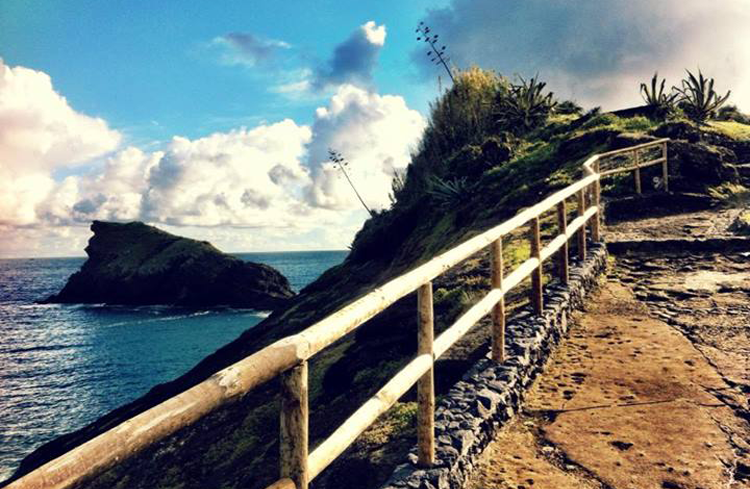 The climate is subtropical all year round with a minimum day temperature of 16° C (60° F) Celsius in January to the highest average temperature of 26° C (79° F) in August. The sea is affected by the Gulf Stream which generates temperatures about16-23° Celsius all year round. In average there are 7 - 8 hours of sun per day during the summer and 3 - 4 hours during the winter. The precipitation is distributed over the year but is heavier in the winter. Characteristic for The Azores is the mutable weather during short periods of time. One single day can carry wind and serenity, hot sun and rainfalls in any combination! A good and honest phrase is that if you do not like the weather you will just have to wait ten minutes. The conditions make the islands fertile with a very opulent vegetation in all shades of emerald green. The isolated location also makes the air very clean which allows some unusual lichens to flourish on the tree trunks.

The Azores have inexorably been influenced by many of the cultural events in Portugal. In 1444 Portuguese colonists and Frenchmen started to populate the island of Sao Miguel. These settlers were farmers and Azorean culture of today is substantially based on agriculture and farming that reflects a lifestyle where it was necessary to be independent but yet cooperating to survive. The population on the islands put together amounts to up about 250 000 where around 70 000 lives in Ponta Delgada. The inhabitants are mainly Roman catholic and several religious festivals take place and play an important role to the Azorean people. Music and dance are widely practiced and enjoyed and there are several well-known Azorean poets. The Architecture is conformable with local materials from nature, mainly lava stone and limestone. Azoreans are faithful to old cooking traditions. The food is well prepared and not very spicy. Seafood is a speciality as well as a large variety of cheese and you surely will love the Azorean sweets and cookies! On São Miguel the only tea plant in Europe is situated and there are several pineapple plantations famous for peculiar sweet and tasty fruits. Several of the islands have vineyards. Beer and liquors are produced as well. 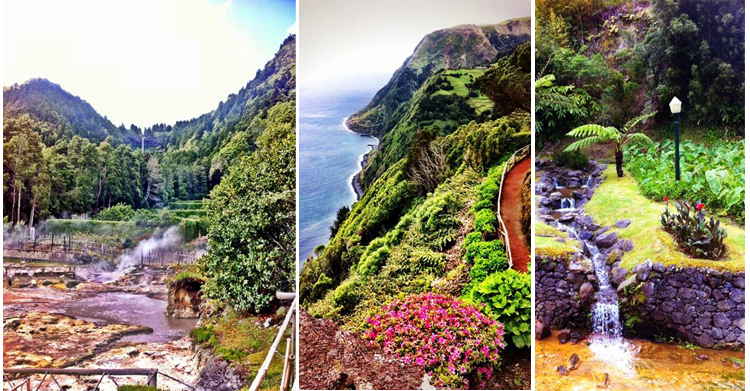 Each of the nine islands has its own characteristic formations and offers a vide range of things to discover and experience. Not least entrancing nature sights! The islands are comparatively quite spared from tourist exploitation and the dramatic landscapes are breathtaking! The region is an ideal place to go to if you are more of an adventurer. Plenty of activities are available such as excellent diving, whale watching, trekking, boating, kayaking, golfing, paragliding, horseback riding, biking and geotourism. The marine life around The Azores is spectacular and if you are interested in diving or whale watching this area is definitely a major treasure chest! A plentitude of centres offers a variety of tours for these activities. The Azores are no regular place you go to for a classical beach holiday. That does not mean there are no sandy stretches, but the main attractions would be to swim in the natural sea pools formed from the collapse of small volcanic craters or take a bath in the mineral rich hot springs on São Miguel or Graciosa. Further information regarding sights and activities of special interest are listed below

(São Miguel) The mythical green and blue lakes situated in a grand volcano crater. Spectacular views that will get stuck on your rethina and take your breath away! Make sure to visit this place on a day with no fog since it will ruin the views.

Lagoa do Fogo / ”Lake of Fire”

(São Miguel) Beautiful crater lake with an interesting history. Beautiful views and trails is to be found on the crater as well as down by the lake.

(São Miguel) At Poca Da Dona Beija or Parque Terra Nostra you can take a very pleasant and relaxing bath in natural and mineral rich hot springs with perfect temperature. In certain areas where the water is boiling hot, you can get your food cooked in the ground.

(São Miguel) Naturally warm waterfall in the forest and a beautiful spot for thermal spa relaxation.

(São Miguel) This small island lies about 1 km from the coast of São Miguel. It is formed from a crater of an ancient submerged volcano. The area is classified as a nature reserve, which makes it very rampant. The centre of the islet constitutes of a natural and almost perfectly circular lake, which is linked to the sea by a narrow channel. This formation prevents the sea waves from entering and the crystal clear water is excellent for swimming and diving

(São Miguel) The region has a dramatic and beautiful coastline that is very ravishing.

(São Miguel) The enjoyable capital of the Azores.

(Santa Maria) The only beach with white sand on the Azores. Everywhere else the beaches are in volcanic shades of black, red or brown. The place is also a nature reserve, and wine yards are leading down to the sea.

The area around the Azores offers among the best whale watching spots in the world with plenty of resident and migratory species. Sea turtles are a common sight as well. Tours departure daily and some centres even provide the possibility to swim with wild dolphins.

(São Miguel) Dramatic waterfalls situated in the national park of the island.

(Terceira) Fascinating and colourful lava tubes where visitors can descend 100 meters into the cave to discover a hidden crater lake.

(São Miguel) Taste a cup of freshly picked and organically grown tea at the oldest tea plantation in Europe.

(São Miguel) This place offers several horseback riding tours with different outsets across the island. From short rides to full day experiences with lunch included. Beginners as well as skilled riders are welcomed and the horses are very well cared about. The place is also a very cozy and personal privately owned hotel with great service and very friendly staff.

April-September is considered the best time to visit The Azores. In the spring the islands are overflowed with flowers so May might be the ideal month to go there. That is also the time when the ferries between the islands start to run if you are interested in a roud tour. Summer is prime whale watching time.

How to get around

Hiring a car is the best way of getting around the islands. The roads are partly quite narrow and tortuous but overall the roads are passable. An alternative, is to hire a taxi for a half- or full-day tour. Buses operate on each island, although not very reliable regarding the timetables. Anyways they serve as an possibility in getting an overview of any island.

Capital Ponta Delgada Language Portuguese Currency Euro Electricity Electrical sockets in the Azores usually supply voltage 220 / Frequence 50 Water In most areas, the drinking water is excellent! If you are uncertain, supermarkets also sell cheap bottles of mineral water. The tap water however suits well for tooth brushing. Traffic Traffic in the Azores drives to the right. The streets are partly narrow and people tend to drive quite fast. Safety The criminality is very low and there are no snakes on the islands. If you are just going for a holiday trip, no certain vaccinations are required.