“Even though Oceania consists of 24 different countries, everything largest and longest is in Australia. Its land mass stands for 90 % of the whole continent.”

Oceania is the smallest continent in size, but it still has more countries than South America. Most of the countries are very small and somewhat unkown, which makes the continent very interesting for the more adventurous traveler. Australia is a part of Oceania even though some think the country is a continent itself. Australia has the largest population, largets lake, largest coral reef and the longest river. New Zealand, famous for the “Lord of the Rings landscapes”, is also a part of Oceania. Together with Australia, they represent the westernized part of the continent. The other 12 countries consists of thousands of smaller islands in the Pacific Ocean. All “islands” except Australia are divided into three regions: Micronesia, Melanesia, Polynesia. 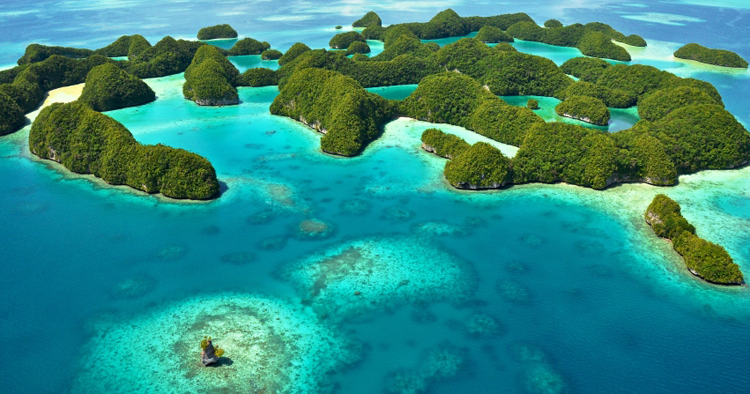 Micronesia is situated in the northwestern part of the Pacific Ocean and consists of approximately 2100 islands. These islands are divided into four larger island groups. They are called, the Mariana Islands, the Gilbert Islands, the Marschall Islands and the Caroline Islands. These island groups were settled several thousand years ago and had contact with Europeans in the early 1500s. The climate is tropical and the dry season is normally between December to June and travel is recommended during this period. If you choose to travel to a Micronesian island during the rainy season you might be unlucky and encounter a typhoon.

Polynesia is the largest region in Oceania. It is formed as a triangle and stretches from New Zealand to Hawaii to the Easter Island. Its area is greater than Micronesia and Melanesia put together. What the three areas all have in common regarding their names is the last parts “-nesia”. In Greek it means “island”. “Poly”, means “many”. In other words, Polynesia means “many islands”. However, it has about the half amount of islands compared to Micronesia. For the adventurous traveler there is a lot to see and explore. Just New Zealand has a lot to offer, especially for the nature and grand landscape lovers. If you are more into relaxing on a tropical beach, the Bora Bora island is a must-visit. Enjoy further reading about specific travel destinations for more recommendations and tips.